Entrepreneurship: a Practice in Just Seeing What Happens 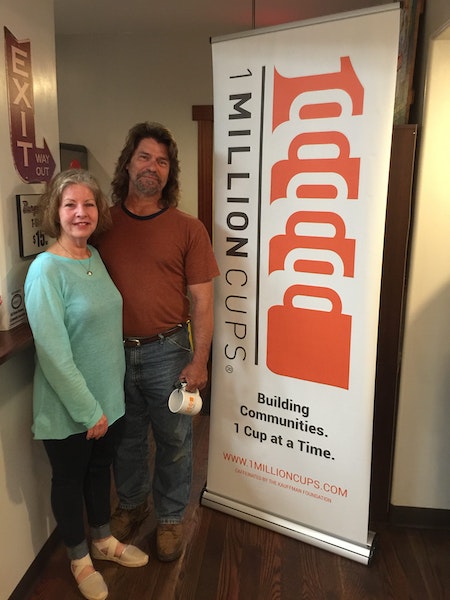 “Julie and I have been in business for 33 years; I would call the past 30 years stagnant but we have been on fire for the past 3 years. I truly believe that Ball Ground is the new place to be. I’ve met several people who have either moved in with big plans for a business or are thinking about moving in with big plans for their business,” said David Boone during his presentation at the 1 Million Cups Cherokee (1MC) gathering Wednesday morning.

This gathering was particularly special due to its new location at the Ball Ground Burger Bus in Ball Ground’s historic downtown district. Burger Bus owner Dylan Brown, a previous Lunch Circuit presenter, opened the doors to welcome Cherokee’s entrepreneurial community and the audience had a grand time connecting over cups of coffee and vintage bus seats.

Jonathan Chambers, Community Manager of Entrepreneurship for the Cherokee Office of Economic Development, introduced Julie and David Boone, the couple behind Wild Cat on a Wing art gallery Feather’s Edge Vineyard and Wild Cat on a Wing art gallery, by telling the story of how he found them. Crunched for time to find a speaker for the gathering, Chambers scoured Ball Ground for a small business owner willing to tell their story. The Boone’s and their recent vineyard venture came up in conversation several times and Chambers took the chance to seek the couple out. Fortunately for Chambers, David is a man who “recognizes that his success comes from meeting the right people at the right time,” and agreed to share his business model at 1MC Cherokee.

“It all began when I bought a ’72 Corvette that I couldn’t afford. I sold the car, made some money off of it, and with our combined savings we were able to buy a house. We didn’t have but two nickels to rub together, but it was ours,” David recounts, nodding to his wife and business partner Julie sitting in the first bus seat.

Julie and Dave set up their shop to make paper for artists, a real life Dunder Mifflin if you will, when they started an art gallery, Wild Cat on a Wing, and worked with the artists to sell birdhouses. “We have sold over 60,000 birdhouses over the past 30 years.” Accruing additional fine art pieces was the natural next step and when the economy took a downturn in 2007, the pair turned to the property to supplement their income. After careful research and guidance they built a five-acre vineyard and partnered with Three Sisters Wine to build their own tasting room, which lead them to where they are today: a small business looking to expand.

“Last week was the biggest week of our career,” said David. He is talking about their new tasting room and outdoor music venture. During the research period, David found that vineyards are incredibly competitive, and it is imperative to offer more than a tasting room in order to attract customers. David and Julie landed on constructing an amphitheater to open their doors to a younger crowd. “We have found that there has been a resurgence of the gallery through the wine. Younger people have not experienced a good economy and never had the extra money to spend on fine art pieces like they have the opportunity to do now.”

David spoke on the troubles of promoting the new event space to those outside of the Ball Ground area. Without any promotion of their art gallery, Wild Cat on a Wing, David and Julie had no issues garnering business. “On our very first day, Julie said ‘Let’s open the gate and see what happens,’ and as she opened the gate a car pulled in and we have had a constant flow of business ever since.”

The audience was receptive to the issues of targeting an audience and building a loyal tribe around a product or idea. The general consensus was that promotion through social media would prove the most beneficial for entrepreneurs on a limited budget.

During the Q&A session, an audience member asked what advice David would have given his younger self. “You need to go for it wholeheartedly,” David quickly replied. “The risks you take are huge but being young and without a family is the best time to make huge risks. You can’t just tiptoe into your idea, you have to dive in and go for it.”

You heard it from David, it’s time to #riseup Cherokee and commit to that idea you’ve been floating around for so long! Bring that idea with you to our next 1MC Cherokee gathering at the Circuit on June 6th and find feedback and support from our entrepreneurial community.

To learn more about 1MC or if you are interested in being a presenter, please visit the website to be directed to the application.

If you missed the event this morning, you can still access all the fun! All of the 1MC Cherokee events will be live streamed and recorded. So, pour yourself a cup of coffee and check out the presentation here: https://www.1millioncups.com/cherokee

1MC Cherokee will meet back at The Circuit on June 6th and be at the Holly Springs Train Depot on June 20th from 9-10:00 am.