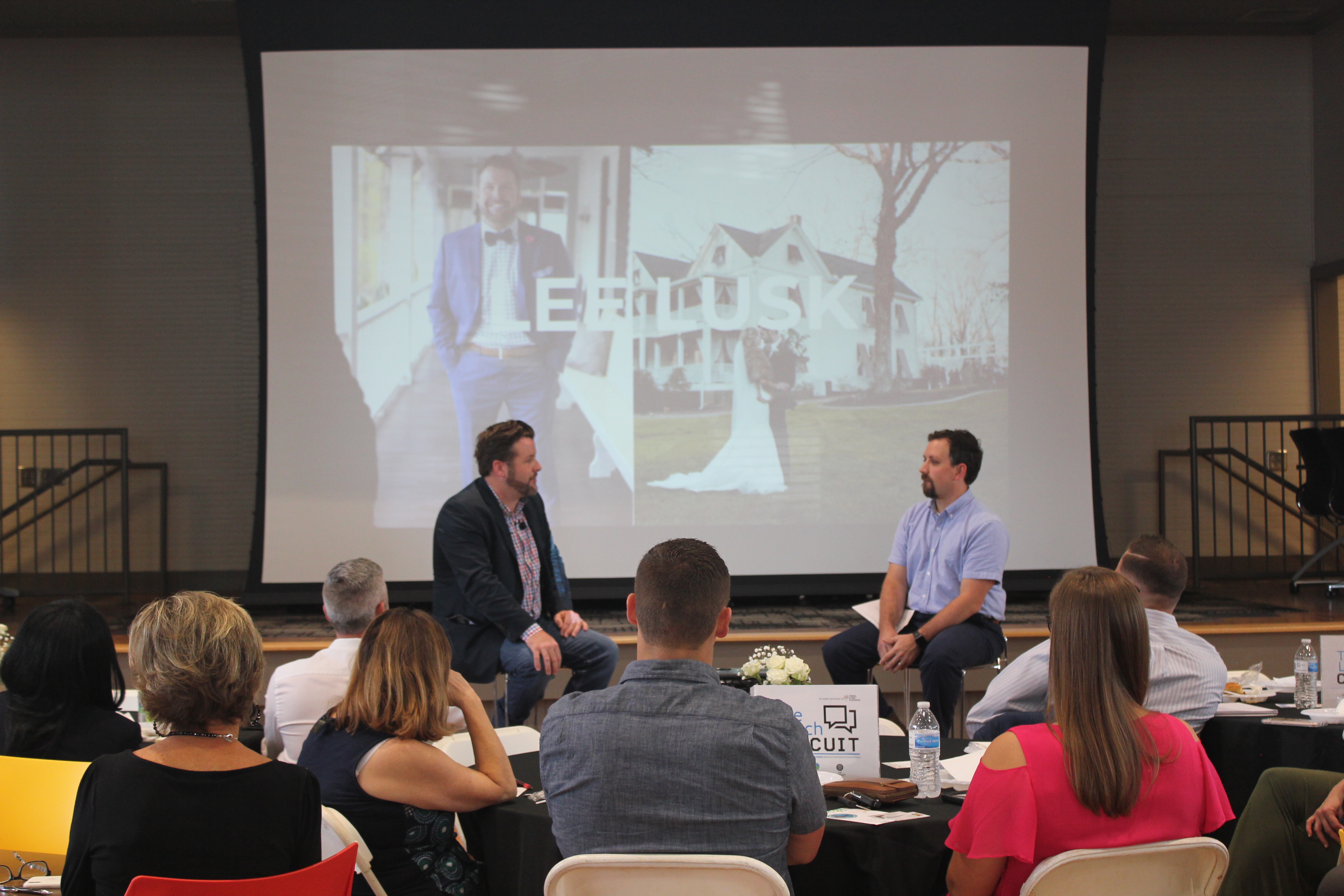 The Circuit, a coworking space powered by Fresh Start Cherokee in partnership with the Cherokee Office of Economic Development, hosts a monthly lunch to cultivate a community of entrepreneurs. In celebration of the year’s most popular wedding month, the program hosted Lee Lusk, CEO of The Wheeler House, for September’s gathering. The premier North Georgia venue booked its first wedding in 2011 and quickly became a fixture of the Ball Ground community. Lusk shared his journey of purchasing and renovating the venue and a few lessons he learned along the way with the Lunch Circuit audience and program host Jonathan Chambers, Community Manager of Entrepreneurship at COED.

Lusk grew up in the Canton area and began a career as a real estate agent after graduating high school. Staying in the area was an easy choice for Lusk because Cherokee is where his family is, “Both sides of my family have been here since the founding of Cherokee. My third great-grandfather is Joseph Knox of Knox Road and Knox Elementary School, and my fourth great-grandfather was Cherokee’s first sheriff. I built my career here because of my family and location of the county. Cherokee is close to Atlanta but far away enough from the city so I can live in the country and be surrounded by a community.”

Lusk remembers driving past what is now known as The Wheeler House every Sunday morning on the way to church. “It was painted puke yellow, it was an ugly house.” The color didn’t deter Lusk however and he had plans to buy the house and make a bachelor pad out of it. “My initial thought in buying the house was to rent out the other three rooms so I could live there rent free as long as I wanted.” It wasn’t until a host on the HGTV television series Design Star drove by and proposed to partner with him in setting up The Wheeler House as a wedding venue. “The house needed a lot of work and I never thought about making it a wedding venue but my friends were getting married at the time and I saw what they were paying for venues and what they got for the money and I remember thinking that it was a business I could get into and do it cheaper.”

Purchasing the house proved to be an endeavor in itself- Lusk was denied twice before winning the bidding war on the third try. “I made my offer all cash even though I had no cash. I had horrible credit, a negative net worth, and no money. It was in the middle of the recession and I was back living at home, but I knew if I could get my hands on the house I would be able to figure things out from there.” Lusk was able to figure things out and after closing the renovations went underway. “Previous owners were able to hire out teams for the renovation, but I didn’t have that option, I had to work on the remodeling myself. It was about six months into the project when I had a check bounce. I thought it was a mistake, I had about $100,000 in the account to start with and assumed there was about $30,000 left by then but that wasn’t the case, there was no money left. I learned then that I wasn’t very good at organizing and keeping the books. I had to bring in a cot and I slept at the house while working on it through the night. I had to let the team go and rely on help from friends and family to keep the project going.”

And keep going it did. The venue has booked about 500 weddings since its start in 2011 and Lusk had the vision to add the barn in 2013. “It was around the time when Pinterest got popular and the rustic barn theme exploded. I began the barn project with $20,000 but that money barely covered the foundation. I knew that if I could show the brides what the barn was going to look like they would see the vision and book the space. I used my niece’s water color set and painted what I wanted the barn to look like. I framed the picture and set it outside to show the brides how the mud hole was going to transform into a barn. I knew that if I could get 30 brides to book their wedding and make a deposit I would be able to build the barn within 3 months and that is what happened.”

The property now consists of the house, the barn, and then three cottages down the road. “The cottages were rental properties for the saw mill employees and we renovated them so wedding guests could stay,” explained Lusk. He added that there are plans in the works to transition the cottages into a full bed and breakfast outfit because currently there are no other accommodations for visitors in Ball Ground. “We had an estimated 21,000 people come to The Wheeler House last year for weddings and a newspaper recently named Ball Ground the “City of Love” because there are 5 venues here now, but there still isn’t a place for all of these visitors to stay.”

When asked about his plans for expansion Lusk mentioned that he has more plans to expand internally rather than add new venues. “My linen business almost does more business than the wedding venue itself, so we are looking into adding services like in house flowers.”

“How did you become an entrepreneur,” asked Chambers. Lusk was able to answer immediately, “I can’t take direction, I have to do things myself. I have several family members who own their own business and I always knew that I would rather lose trying to make it on my own rather than win working under someone else. I’m also more of an idea guy, I can start projects but lose focus when it gets closer to the end, but because I am my own boss and working on my own projects I am able to do something new every day.  I’m also competitive. When I started The Wheeler House it was the second wedding venue in Cherokee, now there are 28 venues and of those 26 of them are rustic barn themed. I don’t mind this though, I love being competitive and playing the game.”

“There is a tendency for entrepreneurs to wear all the hats. How do you get to a point where you realize that you are good at these things and not at others?” asked Chambers. Lusk laughed as he answered, “I always thought I was good at delegating tasks, but my family would say otherwise. I’m not good at managing and unfortunately, I am still the manager. I’m the guy who wakes up late, rushes to Home Depot to purchase the supplies, and shows up to the project two hours behind schedule. I hired employees when I was able to afford them, and I now have a wedding coordinator, accountant, and marketing coordinator.”

When the lunch ended, Lusk closed with the story of how The Wheeler House got its name. “The man who built the house was John Wheeler. He owned a lumber yard in downtown Ball Ground and would haul the lumber from the house to the yard downtown to have it cut. I’ve seen many homes in Charleston and Savannah but even they do not have heart pine floors, ceilings, and walls like this house. I’ve never seen a house with that level of carpentry and I thought it would be honorable to name it after him.”

Powered by Fresh Start Cherokee, located at The Circuit, and hosted by the Cherokee Office of Economic Development.

Monthly ticket only event. To join us for our next Lunch Circuit featuring David Leggett on
October 10th, 11:30 am – 1 pm, visit the following link: https://lunchcircuitdavidleggett.eventbrite.com