Rising Small Business Rockstars and the Mentors that Inspire Success

Mentorship is a two-way street, but with the North Atlanta Venturing Mentoring Program (NAV) – it’s a multiple-lane highway.

Tucked along a short 1.5 mile stretch on Highway 5 in Holly Springs are two rockstar businesses that have taken the NAV program by storm: Alma Coffee and SuiteSciens. NAV is changing the way startups do business. Principled and trained off the MIT Venture Mentoring Service (VMS), this unique program gives entrepreneurs the guidance they need to succeed through the power of team-based mentoring.

Alma Coffee, a farm-to-cup roastery headquartered in Holly Springs, has captured the hearts and taste buds of many, even outside of the U.S. Their sustainably grown coffee is best described by having a wide variety of roast options with rich flavors and a smooth finish – freshly harvested from their farms in Honduras. 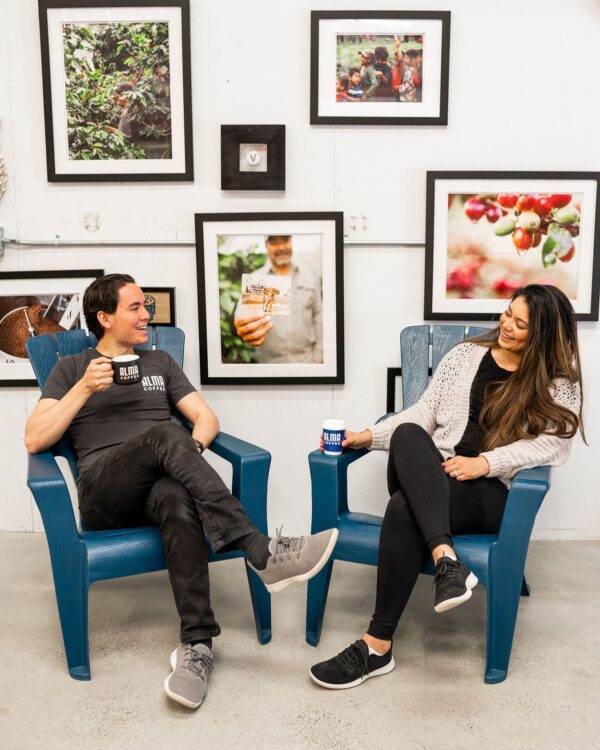 In Cherokee, Alma Coffee has quickly become a household staple in restaurants, offices, and trendy kitchens. Instead of brewing up a cup of Folgers, we pass the Alma. But how did this budding small business owned by husband-and-wife duo Harry and Leticia Hutchins build such a devout following? That’s easy. Smart marketing, bold vision, and team-based mentoring.

Harry and Leticia Hutchins, along with Leticia’s father Al Lopez, grew Alma Coffee out of the desire to serve up coffee with “soul” – the Spanish meaning of Alma.

Alma’s story goes back many generations but took root in Cherokee in 2019 with the grand opening of its Holly Springs Roastery and café in The Circuit Woodstock. Owners Harry and Leticia Hutchins will be the first to spill the beans about how getting involved in the NAV Mentorship Program has made all the difference in catapulting their business from startup to success. Since starting the program, Alma has grown to 12 employees, automated its fulfillment process and increased packaging speed by 6x, moved and expanded its café to its roastery location in Holly Springs, and obtained its own export license – making it one of almost 260 companies that can export coffee out of Honduras.

“Thank you so much to our NAV mentors for guiding us and mentoring us through this global pandemic,” said Leticia Hutchins. “For any ventures out there or small ventures getting started, I’d highly recommend the NAV mentorship program as your first step,” said Harry Hutchins.

Ventures like Alma are made stronger by those who invest in their success like NAV Mentor and Woodstock Mayor Michael Caldwell.

“There’s no better way for seasoned entrepreneurs to give back than to work with up-and-coming ventures,” said Caldwell. “The NAV program provides such a unique way to give our ventures multiple perspectives on specific problems and empower them to scale.”

Another inspiring success story is SuiteSciens Founder Shalakay Gibbs, a native of Jamaica. This rockstar business owner turned NAV venture has seen tremendous growth in her business. Gibbs’ company is a NetSuite consulting and implementation firm that empowers companies with the tools needed to successfully grow and scale.

This up-and-coming tech company, which started in Cherokee’s first coworking space – The Circuit Woodstock – has been a part of the NAV Mentorship Program since its founding in July 2019, along with fellow venture Alma.

Shalakay is no stranger to leading complex technology projects as an ERP Consultant with over a decade of experience leading cloud infrastructure development projects.

Since taking the plunge with NAV, Suitesciens has grown “byte by byte.” In technology terms, that’s a lot. The company has hired on new talent, including a business development representative and virtual admin, unveiled a new website, launched a pre-paid managed services program, and signed two managed service clients.

The sweetest part of the deal? SuiteSciens revenue is up 34% compared to 2020, a milestone that’s worthy of celebration. With growth, comes change. In February 2022, Shalakay moved out of The Circuit coworking space and expanded her corporate office in Holly Springs – a move that represents the success of not only SuiteSciens but the NAV mentorship program’s ability to grow and scale local business.

“Shalakay Gibbs embraced her NAV Mentors as a “resource team,” allowing them to partner with her in her growth,” said NAV Mentor Barbara Baxter. “She utilized the strengths of the three mentors to her benefit by utilizing recommendations and in-depth discussions from mentoring sessions to build on her ambitious business plan.”

For Gibbs, Cherokee was a natural fit for SuiteSciens. “We knew we needed talent and resources to scale. Cherokee fit the bill. Initiatives like NAV keep the business community connected and provide the resources needed to grow.”

Achieving “rockstar” status as a business owner does not happen overnight. It takes time, resources, community investment, and most of all, mentorship. Think you have what it takes to be a part of the NAV mentorship team as either a mentor or a high-growth venture, visit https://northatlantavms.com.